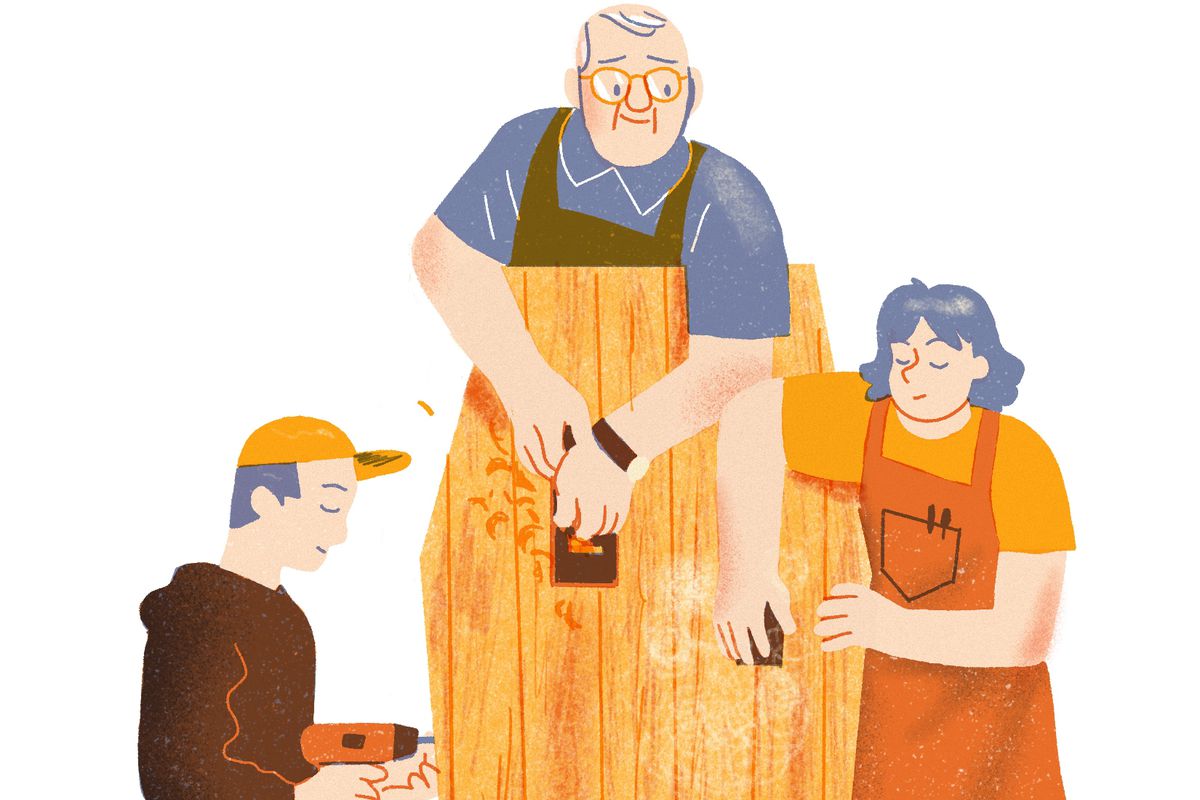 When my wife died, I knew I had to build her casket

The First Person is a daily personal piece submitted by readers. Do you have a story to tell? See our guidelines on tgam.ca/essayguide.

In the corner of my friend’s workshop was a stack of western red cedar fence boards, salvaged from a neighbor’s yard. Ross and I loved working together to build small tables and shelves out of reclaimed wood. We would sell these items and send the money to outreach projects in Vancouver’s Downtown Eastside. At some point, we planned to use these cedar planks to build and sell planters. But when my wife of 55 years died, I had a new and different idea.

What followed too quickly after Sandy’s death was a reluctant trip to the funeral home. My daughter Joanne and I were greeted respectfully at the door, followed by a somewhat ritualized conversation in three distinct parts. The first was to describe the funeral home’s offerings, such as use of the chapel and cars. The second part was tedious – filling out legal documents that left me fumbling for locations and dates. This part, while necessary, felt incongruous alongside raw feelings of grief. The third part moved on to choosing a coffin.

Sandy, in moments of earnest conversation with me, made it clear to me that when the time came, she wanted the simplest and least expensive funeral. She was practical. My eyes were drawn to a plywood box, somewhat out of sight, in the corner of the room. The price listed was, I thought, rather high for a plywood box.

“Why not,” I thought, “build a box for my partner’s body out of those old cedar planks?”

I mentioned this possibility to the funeral director and although he had a somewhat ambiguous response to such an unlikely proposition, he agreed that such a box, given strict adherence to dimensions, would be acceptable. I wasted no time in proposing the proposal to Ross. “Let’s do it,” he said.

My two grandchildren, Adam, 15, and Ella, 20, were within earshot of the conversation. They spoke up, in unison, stating unequivocally that they would like to help build the box.

I felt reluctant at first. None of the grandchildren had much experience in handling tools and knew little about the art of carpentry; however, that was not the point. A desire to honor their grandmother through box construction was the point.

The next day, the three of us went to Ross’s tidy workshop. Our first task was to go through the stack of boards. All the six-foot-long rough cedars weren’t even close to being usable. Ross, more meticulous than I, drew up a detailed plan for the construction of the box, which was to be 76 inches long, 18 inches wide, and 23 inches deep. His designs called for a plain plywood lid: “A good surface for writing messages,” he suggested.

Sanding those spiky boards would be the second and main task. After a brief orientation on the dos and don’ts of a belt sander, Adam and Ella got to work. Belt sanders require a slow, rhythmic, and thoughtful motion. In my 84 years of life, I could never have imagined what I was observing now. Standing at a distance, I saw their faces take on a delighted look as these old planks were transformed and the grain of the red cedar became crisp and beautiful.

We made several trips in threes to the workshop. Ross became a kind of carpenter mentor to my grandchildren while I thought quietly watching them. I couldn’t help but see their sanding as a symbol, a kind of transformative and transitional event. I could feel my heart warm and my spirit come alive. I recognized in their meticulous and compassionate work a transition from one generation to the next.

In the end, it was a beautiful cedar casket. When finished, we wrapped it in a blue tarp and put it in the trunk of the car. We had a chuckle when we saw how three feet of the box couldn’t fit in the trunk. So we tightened a few straps to hold him in place and drove slowly to the funeral home.

At the funeral home, we carefully removed the tarp and carried the box three inside. We were greeted by a somewhat surprised funeral director. “It’s so beautiful!” he exclaimed. We mentioned that we had a few items to put in the empty box. “No problem. Come tomorrow,” he said.

The next day, the three of us came back, joined by my daughter and my son. We carried green cedar branches and small heart-shaped stones that Sandy had picked up on the beach where she grew up. I also carefully placed a love letter in the box. We took our time. The funeral director gave us colored markers and we drew pictures and wrote goodbye messages to our Nana, our mother and to Sandy, my partner and lifelong friend, the love of my life and the center of our family circle.

Then came the time for each of us to grab the crate and place it in the waiting hearse. At the crematorium, her body would be laid in this beautiful homemade cedar box accompanied by words and symbols of our love.

As the hearse slowly moved away from view, we put our arms around each other and hugged each other. The moment felt like a natural good start, made with intention, love and sadness.

Register for the Parenting & Relationships weekly newsletter for news and tips to help you be a better parent, partner, friend, family member or colleague.