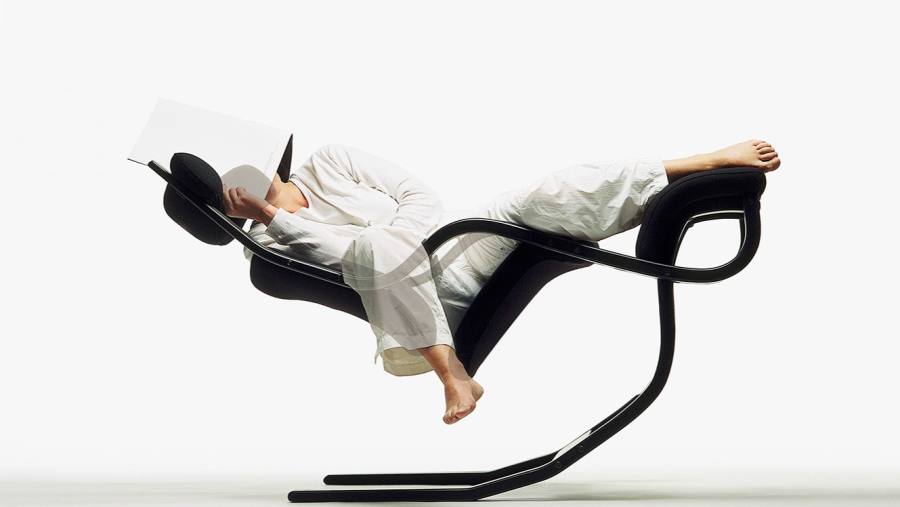 For several centuries, the design of office chairs has been oriented towards a single ideal: a chair so comfortable that workers could spend eight hours without having to move. Thomas Jefferson was an early pioneer of this “do less to do more” philosophy when, in 1776, the future president inserted a rod and casters under his Windsor chair to create the world’s first swivel chair. In 1840, Charles Darwin fitted wheels to his chair and used it to slide between specimen drawers.

Today’s ergonomic office chairs are equipped with half a dozen buttons that help you position your body in the ideal way. They are designed to reduce the stresses of this long-term immobility, otherwise known as “office life”. The webbed material used in Herman Miller’s iconic Aeron chair, for example, was originally developed to prevent pressure sores. Such innovations are ergonomic marvels, if we mean by ergonomics “something that helps you work more”.

But, for proponents of “active sitting,” every improved lumbar support and padded armrest is one step away from light. Talking to an active chair evangelist for the first time is something like discovering that you have the function of an everyday object entirely upside down. Are you comfortably seated? Too bad, but I’ll start.

The first thing I must warn you about the active chair community is that its prescriptions have yet to be proven. Active chairs have been around since 1979, when Norwegian designer Hans Christian Mengshoel patented a kneeling chair with a rocking mechanism called Balans. He sparked decades of innovation, most notably from fellow countryman Peter Opsvik, whose unusual designs included a desk chair suspended from the ceiling. Opsvik’s son, Tor, remembers a childhood home where you had to have a death wish to change a light bulb, because everything shook wildly when you stood on it.

Although Opsvik and his contemporaries remain respected as designers, much of the “evidence” for active sitting is extrapolated from evolutionary biology (cavemen didn’t need lumbar support, so why should we?!) And studies in areas of the world where people don’t suffer from back pain. These are usually places where less time is spent in the 90°-90°-90° posture promoted by a traditional chair, where the knees, hips and elbows are all positioned at 90°. Japan in the first half of the 20th century, with its coffee tables, is an example.

Although there is strong evidence that prolonged sitting has negative health effects, there is no conclusive evidence that these consequences are mitigated by sitting in a chair that requires you to make micro-adjustments. to your posture. A 2010 literature review of Balans chairs, commissioned by American furniture manufacturer Varier, concluded that “for some users. . . the ability to alternate between these postures can provide significant benefits” – a particularly tentative summary given that Varier manufactures the chairs in question.

The second thing I must warn you is that, reader, I am a believer. Five months ago I bought a counterfeit Balans chair which has profoundly improved my working life. Before he arrived, I used to sit on the couch when I worked from home. Not out of laziness, but because I am chronically restless and it was the only place that allowed me to constantly position and reposition myself. I stared at my pristine desk and dreamed of what it would be like to work without my laptop warming my lap.

As I write this, however, I’m sitting (well, kneeling) at that same desk – upright, engaged, and gently swaying to make sure I stay that way. After a decade of discomfort, it feels like a revelation, like unlocking the power of a “walk and talk” without leaving the room. Because the chair requires me to engage my heart, I can’t use it all day without breaks, but that’s okay. I currently have the luxury of setting my own hours, so why emulate the presenteeism of lunch at the office from nine to five?

The biggest downside to my kneeling chair is that it’s honestly very ugly. Although a good salesman touts his Scandinavian origins, as if that alone imparts impeccable taste, the truth is that the U-shaped plywood stool resembles a rocking horse crossed with something found in a rehabilitation room. One of my partner’s only opinions of our interior design is that the “strange chair” lives deep under the desk when not in use.

My first thought on entering Back in Action, an active chair specialist with a showroom in London, is that my partner should count himself lucky. My weird chair looks harmless among the game toys for sale here. A chair is shaped like a mushroom and boings like a pogo stick the moment you make contact. Some stools have convex bases that allow them to spin around like tops. As I perch awkwardly on a £729 seat with old-fashioned leg rockers, business consultant Craig Brown pulls out a model of the human spine and tries to explain what these very distinctive seats are all about common.

First, they put you in a posture where the pelvis is raised above the knees. “If you can’t get your hips higher than your knees, what happens is the pelvis moves back. You get a C-shape in your spine,” says Brown, contorting the skeleton into an unfortunate collapse.

The lumbar support provided by an ergonomic office chair will push the spine back into its “correct” shape, but because the pelvis remains tilted, the spine is still under tension.

The chair industry has worked hard to make comfortable chairs so people don’t feel like they have to move. It is a disaster

The second thing an active chair should do is allow you to move. This is where the Balans lose points. On a video call from Vermont, surgeon-turned-inventor Turner Osler frowns in concern when I proudly tell him what I’m sitting on. “The kneeling chair locks you into one position,” he says. “It’s hard to squirm.”

Osler, who founded his company QOR360 (pronounced “core 360”) in 2016, sits on the Ariel while he talks to me. It looks a bit like a bar stool, only the seat is able to swivel in all directions. His living room is filled with prototypes, including a DIY version of the Ariel that uses a tennis ball as a pivot and which he hopes will take off in schools. “The chair industry has worked really hard to make comfortable chairs so people don’t feel like they have to move, and that’s a disaster,” he says. Osler is passionate, even polemical. He introduces me to the concept of “Big Chair” – a cabal to rival Big Oil or Big Pharma – and tells a story I dare not print of when an agent of this sleazy lobby group scuttled his chances of get his chair in the hands of a VIP couple. “They want to kill us,” he says of Big Chair. I think he’s kidding.

After our conversation, I send an e-mail Osler and ask him to send me the most compelling scientific evidence for active sitting. “It’s still early days,” he writes, even though it’s been over 40 years. Top of its list is a 2019 study that found that sitting in a balance chair burned more calories than sitting in a standard office chair or exercise ball. Hopefully more research on active sitting comes soon and takes calorie burning out of the first place, since it’s a particularly miserable reason to do anything. But in his absence, I will offer my own call.

In so many areas of life, we try new things without thinking twice. You might see a subway ad for home shopping or a mattress delivered in a box, and habits you thought were deep-rooted can change almost overnight. But the norms of office life prevent experimentation.

Task chairs are rarely purchased by the people who sit in them. Most companies have aesthetic priorities and safety standards — a five-star wheelbase, for example — that active chairs don’t meet. Practical concerns aside, it’s hard to get over the fact that they look so weird, so medical. Short of being the CEO of a start-up, who among us would want to put our heads upside down while strutting on a mushroom? In the cool office hierarchy, warning coworkers about their C-shaped spine is like bringing your own water filter to work.

Working from home, however, presents new opportunities. It’s no coincidence that Opvsik, Osler and Brown are all reporting very strong sales during the time when most people were stuck at home. “They were in charge of their own workspace,” says Brown in the Marylebone showroom. Your active chair can stay hidden, as well as your slippers.

In a recent essay for The Architectural Review on the gender chair design historyhistorian Catharine Rossi offers the following thought experiment: “The next time you find yourself uncomfortable in a chair, ask yourself if your body is the body it was designed for — and if not, why? not ?

So much has been written about how we might work after the pandemic. An evolution towards flexibility and customization is often presented as the only reward for a few terrible years. If you were one of the lucky few for whom that promise held some substance, you might be able to ask yourself some version of Rossi’s question the next time you sit down at your desk. Does your current way of working match what this chair was designed for? And, if not, could there be a better option out there?

If I disappear this week, you will know where to find me; deep in the basement of Big Chair, strapped to a plush executive lounger while I await my rescue. At least I’ll be comfortable.