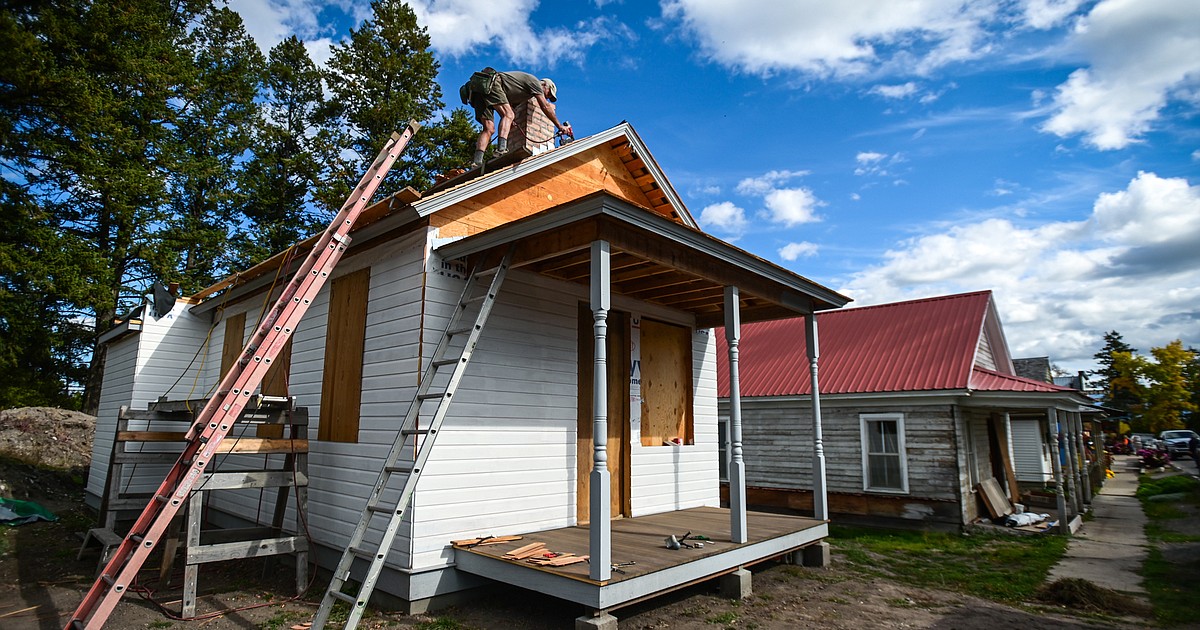 Lee Maxwell works to save the past.

Hammer or saw in hand, day in and day out, Maxwell sits near the intersection of Somers Road and US 93, working to preserve the small buildings that have stood there for over a century.

“People look at these dilapidated old buildings and don’t realize the story that’s here,” Maxwell said. “Teddy Roosevelt was president when these were built. It’s hard to believe how far we’ve come since these were built.

The two buildings that are the focus of Maxwell’s current efforts were erected in 1902 or 1903 (records are patchy as to the exact date) by the Somers Lumber Company and have served several purposes over the decades.

The westernmost building began its existence as a school for the children of the sawmill foremen, while the building next to it housed the teacher.

When the children decided that they didn’t want to be educated separately from their friends, the school became a doctor’s office, with the doctor himself residing next door.

After decades of neglect, Maxwell is doing all he can to restore the buildings to their former glory.

Using as much of the original material as possible, along with items salvaged from ancient houses and structures in the valley and a few reproduced items, Maxwell meticulously brought the buildings as close to their original state as possible.

The work was not easy.

“The banks will not lend money for these projects. They look at the house and think I should forget about them, ”he said. “No one in this country wants to keep anything. People just want to bulldoze old buildings and bring in the new flavor of the week. I didn’t want that to happen here. It’s about saving history.

So far, the seasoned contractor has fabricated new cladding for the buildings as well as new foundations to replace the railroad ties they sat on when he purchased the land in 2008. steam under the old floor forced it to replace much of the sub-floor, and the list goes on.

For Maxwell, however, it’s a labor of love.

“I got into historic restoration after my wife bought a house that was built in 1892,” he explained. “After I finished this project, I got hooked. Now catering is all I want to do. I’m just not a stapled, particleboard type of guy anymore.

MAXWELL A already completed the restoration of the building adjacent to its current project, restoring the house that once served as home to Somers Postmistress, Alma Fisher.

“This first one was actually in worse condition than the ones I’m working on now. It was really trashed, ”said Maxwell. “Everyone said I should tear it down, but I saw it differently. I hated to see this whole thing go away.

Over the course of about a year, Maxwell slowly returned the house to its former glory, including saving the original stone foundation and the hand-dug basement.

During his work in ancient structures, Maxwell says he found a number of interesting historical artifacts, including old medicine bottles from Kalispell pharmacies that have long gone down in history, papers from some doctors who lived in the same house and well Continued. A man even found a license plate on the property from 1906 that said it cost the owner $ 3 (just over $ 85 in today’s dollars).

Maxwell said that while finding neat pieces of history is fun, the best part of the project has been the people stopping by to share their past experiences.

“While I was working on it, it was amazing how many people came over and said things to me like ‘my grandpa lived in this house’ and little things like that. I even had an old one. man who told me he was treated in the doctor’s office after being injured in a farm accident, “Maxwell said.” It really reaffirms the value of saving old buildings when people stop and comment on what I’m doing here. ”