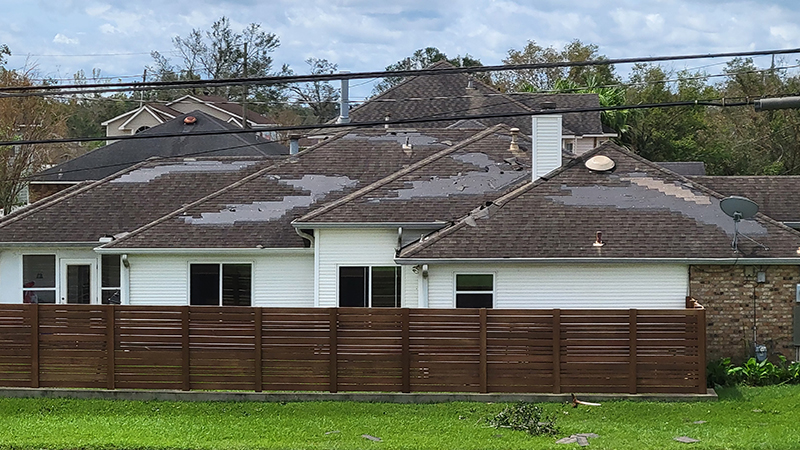 LAPLACE – The centerpiece of the Insurance Institute for Business & Home Safety lab is a large-scale wind tunnel that uses data from real-life weather events to simulate the impact of hurricane-force winds on homes.

Dr Ian Giammanco, a native of Baton Rouge, senior research meteorologist for IBHS, compared “building crash tests” to road safety tests performed on cars. This research has paved the way for resilient building standards that can benefit the River Parishes community as residents prepare to replace their roofs after the devastation of Hurricane Ida.

Prior to the arrival of Hurricane Ida, Dr. Giammanco was on the grounds of St. Charles Parish in the New Orleans metropolitan area, setting up weather stations to record wind speeds with the team from the Texas Tech Hurricane Research Center. He saw the effects of dangerous wind speeds firsthand after the wrath of Hurricane Ida damaged his aunt’s roof in Luling and caused the ceiling to collapse. This type of roof damage was prevalent throughout the region, which is to be expected with wind gusts of over 90 mph for an extended period.

“One of the biggest things that I think we’re going to see come out of Ida is the issues with the asphalt shingles. There are ways to have a back-up plan against this type of shingle failure that we see time and time again, ”said Dr. Giammanco. “Our FORTIFIED Homes program at IBHS addresses this problem with three key upgrades you can perform. Unfortunately, these are not things that are included in our common building codes in most places. “

Dr Giammanco explained that IBHS ‘mission is to reduce damage, displacement and disruption resulting from severe weather events by testing construction products, materials and systems against the impacts of storms.

In recent years, IBHS standards have been incorporated into the building codes of Alabama coastal counties. While those standards are not yet required here, Dr Giammanco said Louisiana recently passed legislation to promote insurance discounts for homes with roofs built to IBHS standards.

Assuming a roof loses all of its shingles in a storm, Dr Giammanco said residents can expect nine tubs full of water to enter a home for every inch of rain. Building a roof to a higher standard significantly decreases the risk of water infiltration.

First, Dr. Giammanco suggests sealing the gaps in the plywood that makes up the wood decking. Gaps are traditionally left in the plywood of unfortified roofs to allow the wood to expand and contract, but this also allows water to seep into a home, damaging the Placoplâtre and insulation when shingles. are damaged in a wind.

“There are ways to seal them. The most common is to glue the seams with tape designed for this application, ”said Dr Giammanco. “Another mechanism is to put in a full sheet of material that basically adheres to the roof deck. It is also possible to add two layers of sturdy felt. Underlayment is the technical term for the layer that sits between your shingles and your plywood deck.

Second, the FORTIFIED Home program suggests additional detail and additional adhesive along the edges of the roof, which tend to be a vulnerable area during windstorms. Instructional videos explaining this process are available at fortifiedhome.org.

“These nails have little ribs on them, and they can actually withstand the uplift forces of the wind trying to lift this plywood by almost double, if not more, then with a conventional nail can resist,” Dr. Giammanco said. “These steps are not yet the norm in Louisiana. As consumers, we need to ask these good questions of our roofers. These days we shop for everything and we have to do the same with our roofs when we have a problem like this. “

When chatting with contractors, residents can frame their requests in the form of statements such as “I would like to make sure my roof decking is sealed” or “I would like ring shank nails used on my roof” .

“If they immediately reject your needs, you should try looking for another roofer,” said Dr Giammanco. “We encourage people to try and find roofers who are in your local community. Following these big events, we unfortunately see a lot of entrepreneurs fly by night. “

Dr Giammanco added that IBHS has assessors who work with roofers to ensure all steps are followed and the job is done right. The process will give the owner a certificate of designation which often results in an insurance discount once an agent is made aware.