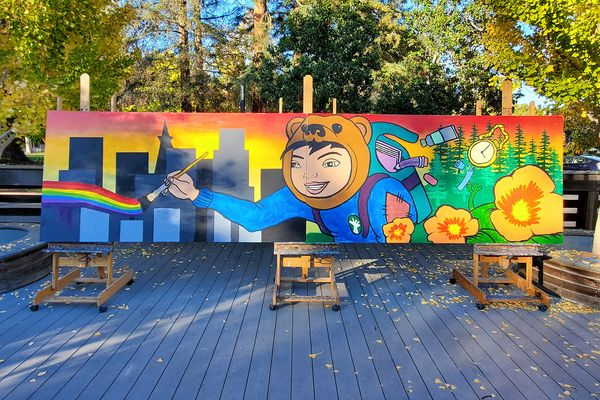 Visitors to the Palo Alto Art Center and Rinconada Library receive a fun and colorful welcome these days: a dense cityscape and lush forest have sprung up near the Newell Road entrance to the complex, all brought to life by the hands of an artistic character friend who seems to reside between the city and nature.

This vibrant world appears in a mural created by the Palo Alto Art Center’s first mural painting class for teens. The mural, which was unveiled on Saturday, December 18, hangs on the fence outside the art centre’s classrooms, opposite the Rinconada Library.

The class brought together 10 teens ages 12-18 this fall to collaboratively design and paint a mural. San Francisco-based artist Corey Pang, who goes by the artist name Sidy, led the class.

â€œArtistic creation is the overall theme, where we have the character in his bear hat, painting the city a rainbow color,â€ Sidy said. “It’s hard to put 10 ideas together, so we all compromised and it was an interesting process.”

The course included not only the essentials of creating a mural, but also information about public art.

â€œWe started the course with an introduction to murals and public art and its role, so that children can understand what makes public art and what positive impact it has on the community, how it can. be made and the different types of public art, â€he said.

Sidy works in a variety of media, including digital, watercolor, acrylic paint, and spray paint. He has worked extensively with murals, including numerous collaborative projects as a third party of the Pineapple Dream Team, with other artists Stay Bacon and Nite Owl, and at the annual Powwow Hawaii mural event, in collaboration with many different local artists. The murals Sidy created or collaborated with can be seen in the Bay Area, including Oakland and San Jose, as well as the Hawaiian Islands.

He came to teach the class through a joint appeal for artists by the Palo Alto Art Center and the local color arts nonprofit San Jose.

â€œOne of our goals at the Children’s Fine Arts Department here at the Art Center is that we are always looking for new teaching artists to expand the media that students can experience and also looking for a wide range of ideas. ‘teaching artists,’ said Lucy Larson, director of education for the Palo Alto Art Center. Larson reached out to Local Color, which has extensive contacts with the Bay Area muralists, to join the project.

The location of the new mural at the Palo Alto Art Center helped inspire the overall theme of the piece, which also has strong California nods, with depictions of redwoods, poppies and, more subtly, d ‘bear, as in the character’s bear hat.

To better facilitate collaboration, Sidy said he asked the students what types of subjects they wanted to paint, and grouped them accordingly, with one group interested in nature, another on cities and landscapes and a third who wanted to paint. characters.

After the drawing was sketched, the students also worked in groups to paint the room. The mural is painted on two large pieces of plywood, which made it easier to mount the mural on the center fence, but also made it easier to divide up the work.

â€œWe would divide them into two groups. If it was (spray painted) we would have to spray it outside and then the other students would hand paint it inside the classroom. So there was a compromise and they were really good at being flexible and just helping each other with what needed to be done, â€said Sidy.

Although these students worked together in the same space to create the mural, the inspiration for the class came in part from a well-received mural project that the Palo Alto Art Center organized with its leadership group to teenagers when stay-at-home orders were last in effect. year, Larson said. Participants painted individual canvases at home and put them together to make one large room, which now hangs in the teenage room of the Rinconada library.

â€œI think after the year we had, having kids who come together to talk and share ideas, think together and then work together, side by side, it was really exciting to see them come together for a project. like this one, â€Larson said, noting that much of the experience since the pandemic has been working alone, on isolated projects.

Sidy said he hopes students will not only learn something new and enjoy the process, but gain a new perspective on what art can be.

â€œI hope they enjoyed creating public art and just enjoy the murals.â€¦ To put the work, the effort and bring your ideas to life – I want them to get that done from the start to finish, â€Sidy said, noting that he also hopes students will learn that a work of art doesn’t have to exist on a certain scale, on a small canvas or on paper.

â€œThey could take that idea and turn it onto a giant wall or piece of plywood. So just to show them that there are different canvases that can be used, and that doesn’t have to be ‘right’. or a dimension. “

The Palo Alto Art Center will be offering two more courses in mural creation for young people this winter, both taught by Sidy, with one offered to younger students, aged 9 to 12, and the other to students aged between 12 to 18 years old. a maximum of 12 students. As with this first mural, the finished pieces produced in each class will be installed in a public place for the enjoyment of all. Larson said she is working on finalizing the locations for these new works.

The Palo Alto Art Center is located at 1313 Newell Road, Palo Alto. For more information, contact the art center at 650-329-2366 or [emailÂ protected], or visit cityofpaloalto.org.

This holiday season, give your home a makeover with Premium Plus from Century Prowud