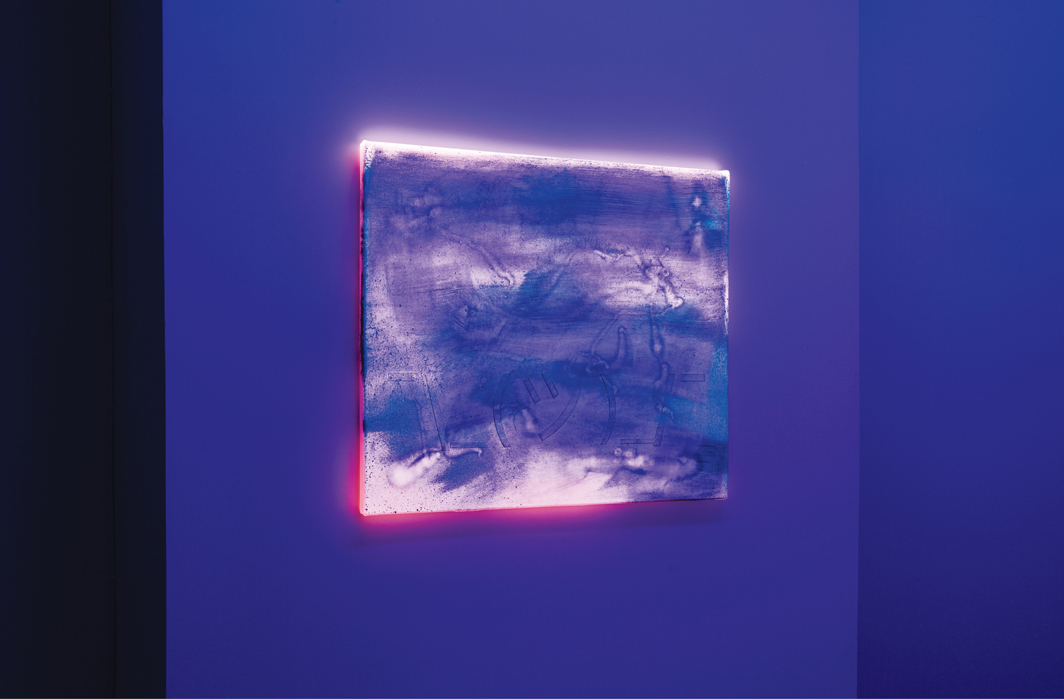 Johanna Fateman on “Looking Back: The 12th Annual White Columns”

THE WHITE COLUMN ANNUAL is a local thing, a super subjective summary of the previous year curated by an interesting person or group. It risks, by virtue of its premise, the appearance of an insider’s view of the New York scene, but the context of its host institution – the city’s oldest alternative space, whose eclectic programming is indifferent to the market and mainstream — and the open sensibilities of those tapped to curate the show reliably save “Looking Back” from that fate. Initiated by White Columns director Matthew Higgs in 2006, it returns after a four-year break; this edition, the twelfth, was produced by the artist Mary Manning. “As the global pandemic raged. . . I felt I was still working with confusion and a bit of grief,” they wrote, reflecting on the selection process. “The experience of going to look at art with a purpose of sorts had a different, happier register.”

With only one work (sometimes two) from each of the forty-five participating artists and no explanatory text, the exhibition courts a certain inscrutability, which presents itself as personally idiosyncratic, not cold. Objects mostly small-scale – the majority are from the 2020s; many are abstract – often more like memorabilia or synecdoches than representative pieces of their original knockout shows. Deana Lawson’s discrete column of cascading snapshots (waterfall assembly, 2020), installed in a corner with pins, summons memories of his most famous companions from his 2021 Guggenheim exhibition: his larger-than-life portraits of subjects from the black diaspora, photos that, with their holographic inserts and their mirrored frames, depict a breathtaking landscape. , domestic-seraphic hybrid realm. Similarly, the white plastic, membranous or asteroidal bas-relief of Nour Mobarak Hemispheres, 2020, is a whispering presence, almost hidden at the top of a wall. I couldn’t place it at first, but I remembered when I looked up the artist’s name in the checklist: Mobarak worked to a less subtle, more colorful effect with saprophytic mycelium (a fungus that prefers dead matter) in his unforgettable New York solo debut at Miguel Abreu last spring.

Sometimes, side by side on a wall, the shapes rhyme, just like the spiky figure, which looks like a cartoon kapow, in Donna Chung’s wall puzzle Untitled (plywood), 2021, and the stiff fiber mane of the painted papier-mâché lion’s head worn by an office worker in an image by Gauri Gill. (For her “Acts of Appearance” series, 2015– the photographer collaborates with mask-makers in rural Maharashtra to stage lush and absurd vignettes.) Thora Siemsen’s half-shadowed portrait by Nan Goldin, Thora at Home, Brooklyn, NY2020, with its vertical panels and tonal warmth, echoes the shade-shadow-and-sunset-golden rectangle of Monique Mouton’s undated painting Sweet expectation.

Manning’s response to what might have been an appalling subject – the not-quite-back-to-normal art world of 2021 – gave me some relief.

But Manning’s lively and almost decorative curatorial approach is not the only cement of the exhibition. The biggest piece here, with its appealing directness and intermittent sound, becomes an ambient and thematic force. The installation of the Disco project, 2021–22, a multi-screen work by dancer-choreographer Neil Greenberg, includes video documentation of the cathartic elegiac performance for which it is named, which premiered at PS 122 in New York (now Performance Space New York) in 1995. In it, dancers wearing hot pink satin shorts and sleeveless tops superbly confuse postmodern concert-dance vernacular and libidinal club abandon as stretches of silence alternate with pop songs and that a text projected in the first person recounts the life of Greenberg. At one point, the line MY BROTHER AND EIGHT OTHER FRIENDS DIED OF AIDS counterbalances the euphoric and heartbreaking “Do Ya Wanna Funk?” falsetto. For gallery presentations, Greenberg adds another layer of commentary on a smaller screen, given both his ambivalence about reframing this material as art and its impact on the present. THIS IS NOT MY FIRST PANDEMIC, notes its video metatext.

The first iteration of her installation was presented at the Greene Naftali Gallery in February 2021 in a more austere setting (the group exhibition “From Disco to Disco”), where a line of untitled black light paintings by Jacqueline Humphries of 2019 kept him company in the dark. Manning chose one to show here too: a compact gestural abstraction in which neon pink glows under purple brushstrokes. Other inclusions allude more or less obliquely to issues of performance, dance, and going out. At Kandis Williams Ratings for stage, worship, and popular entertainment by place, person, genre, speech, music, and dance, 2021 – which appears in his multimedia solo exhibition “A Line” (52 Walker’s memorable inaugural exhibition) – uses photocollage as a sort of aetiological notation of dance. Uncovering the racial history of styles and schools of movement through copy-and-paste transposition, the artist reveals the extractive practices of white modernism and mass media vis-a-vis black traditions and cultural forms. And works like the black and white portrait Au Monocle, Young Inverted, California. 1932, shot in a lesbian nightclub by Brassaï, and Barry (144 Polaroids)1993-1996, a photo grid by artist-designer-performer Frederick Weston, which lists the outfits and characters modeled by the young men of his Chelsea SRO, recalls the self-expression (or anonymity) that nightlife enables and culture challenges of the Covid-19 shutdown for queer communities.

In “Looking Back,” Manning’s response to what might have been a shocking topic — the not-quite-back-to-normal art world of 2021 — gave me some relief. The show seemed to credibly offer that it was a good year for the little things, for perceiving and adjusting, but without making decisive claims about our particular catastrophic-embryonic state.

“Looking Back: The 12th White Columns Annual” runs until March 5.

Johanna Fateman is a writer, art critic and co-owner of Seagull Salon in New York. She is editor-in-chief of Arts forum.