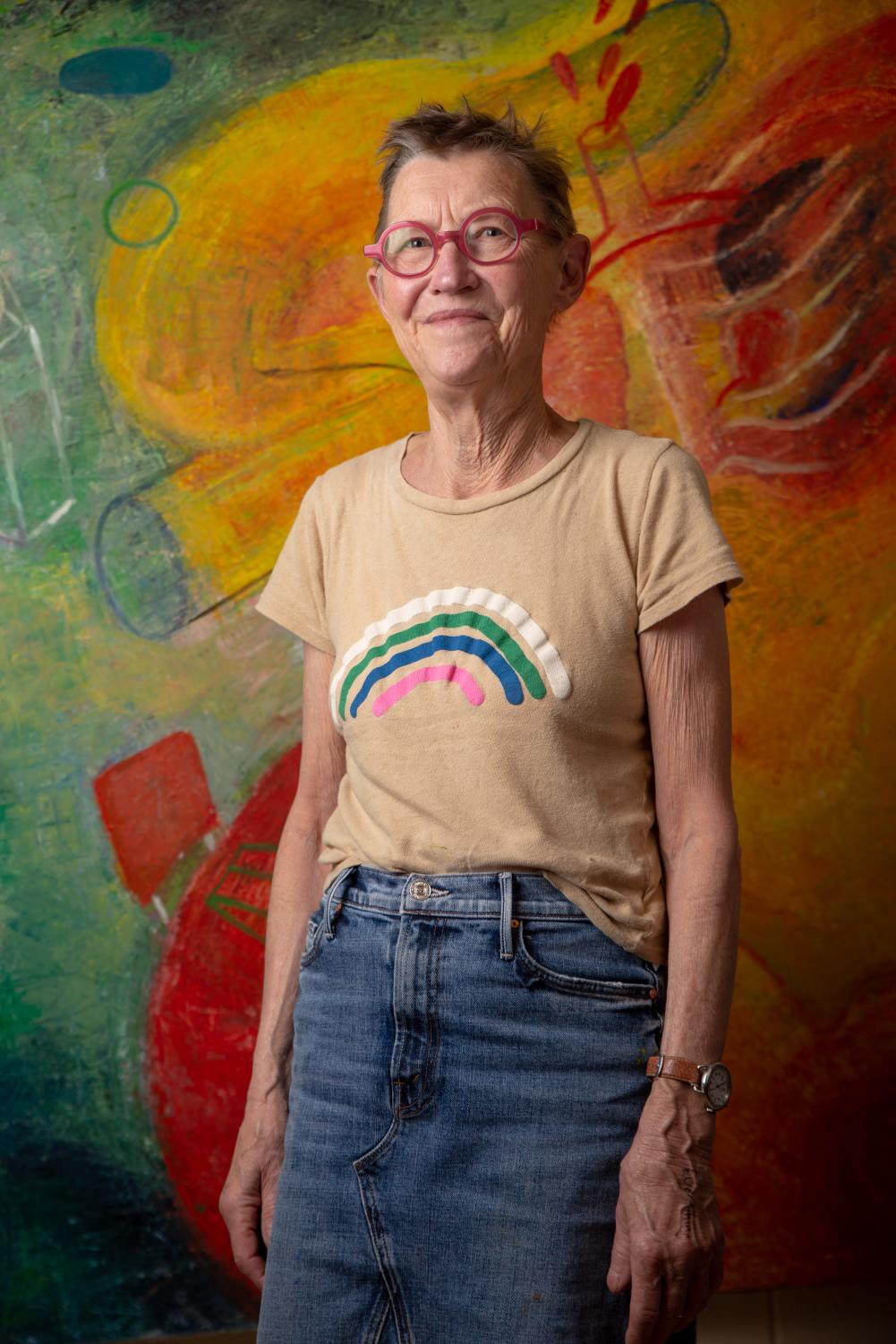 Connected to the Turchin Center for the Visual Arts, around a corner and up a fire escape is a hidden classroom lined with art supplies, covered in paint splatters, and decorated with student work. On Wednesday afternoons, an arts teacher with rose-colored glasses and a warm smile fills the classroom, opening the windows and letting the autumn breeze in.

On Mondays and Wednesdays at 2 p.m., Grube teaches a course called Cultivating Creative Expression Through the Visual Arts, and is open to all students. For most of them, it meets a general education requirement.

Today’s homework, scribbled on a green board, calls on students to work together. In a chef-follow task, students work in pairs where one follows the other to draw characters such as mermaids and chefs. A jazz instrumental version of “La Vie en rose” twirls around the room while Grube encourages students to let their creativity run free.

Students chat and smile to each other while drawing on large poster boards with Crayola markers.

“Have fun drawing,” Grube said when asked what the lesson for the day was. “Why get upset about this? Just draw and have fun with your community and the people in the room. There is too much pressure to draw the right way or the wrong way.

Kate Nazzaro, a second-year interior design student, signed up for the course on a whim. She said Grube greatly encourages creativity.

“It’s okay if it looks bad. The art is meant to be organic and childish,” Nazzaro said.

This is the first semester that this class is being taught. The program is driven by Grube’s own fascination with storytelling, childish imagination and a fascination with a particular art form – comics.

“That’s why I love teaching this class. I love that students are so open about their lives,” Grube said. “I mean, we don’t have them telling stories, but through their drawings, you can see they’re revealing who they are. And they are really wonderful.

Grube said that while they don’t write their own stories, the drawings act as a form of expression. Almost none of the students major in art, and when asked about their drawing experience, some said “almost none”.

“She likes how the drawing is individual,” said Nick Mishue, a sophomore in economics and a student in the class. “It might not be good objectively, but she likes that it really can’t be replicated.”

In her art education classes, she asks students to make comic strips about their own lives. Grube said some students struggled to tell their personal stories and would come to him to talk about it.

“I think it’s helpful to hear about someone else’s struggles because it doesn’t make you feel so alone,” Grube said. “I think sometimes you can feel like you’re isolated and when you hear other people who’ve had a hard time, you think, ‘Well, it’s not just me. “”

Instead of asking students to draw “perfectly” or “accurately,” Grube wants students to express themselves through the comics.

“It’s difficult for a lot of people. What are they doing about it? And then you find out that they’re playing music, or they’re dancing, or they’re going to the theater, they’re listening to something. Grube said. “So a lot of them end up doing comics.”

As for Grube, she draws, writes and publishes her own comics in small 3-inch by 5-inch books. She then sends them to two different bookstores in Chicago where they are sold for $15 each. His comics are based on his own life experiences and often tackle difficult topics, from poverty to civil rights.

One source of inspiration for the class comes from the work of another teacher, Grube said. A copy of “Syllabus: Notes of an Accidental Teacher” by Lynda Barry sits on her classroom desk and serves as a partial class guide. Barry’s book is derived from her own experiences as an art educator and how she developed her classes.

“I’m inspired by her because she uses comics as a teaching method, and I was like, ‘Oh, I love that,'” Grube said. “So I look at his work and I’m inspired. And so that’s where I get my enthusiasm and my joy, from Lynda Barry.

The “childlike” aspect that she encourages in her students’ drawings can also be found elsewhere in her career –– her 20 years of experience working with child artists.

While living in Iowa City, Iowa, Grube led an arts-based preschool program that earned her a doctorate in arts education from the University of Iowa. The program consisted of 30 children between the ages of 3 and 5, which allowed them to have a space for artistic creativity. Throughout this program, Grube documented the students’ approaches to art and the art they themselves created to compile his thesis.

Seeking to leave the Midwest, Grube took a job as a professor of arts education in 2005 and has been in college ever since. She has established herself in the educational and arts communities by bringing the arts-focused after-school program called Room 13 at Boone in 2010.

“I started my own Room 13 and became really, really popular,” Grube said. “And it was so popular that the room was just full of kids making things.”

Based on an after-school program in Scotland called Room 13, where children had the creative freedom to draw, paint, sculpt or make whatever they wanted, Grube facilitated their own space which gave children the opportunity to create their own art.

The program has gained a lot of recognition and even the Chancellor has come to visit, Grube said.

Due to its popularity before COVID-19, Grube had received a grant to expand the program. With money from former College of Fine and Applied Arts Dean Phyllis Kloda, Grube, along with program coordinators, purchased a used Wilkes County school bus to take Room 13 to the outside the classroom. In 2019, his students helped paint the bus and the sustainability department helped build the bus in an environmentally friendly way.

Ready to hit the road, Grube was excited to get the bus going, but as the pandemic rolled in, he kept postponing his takeoff.

“We couldn’t take it off. And then all of a sudden it was repainted and repainted white, and now it’s over in the fleet,” Grube said. “It’s just sitting there, and we’ve had a few places that invite us to come and play.”

Frustrated, Grube isn’t sure what the future of the program and the bus will look like, but said she’d like to make it work.

Sustainability data and measurement specialist Jim Dees said he had graduate students design the solar-powered system inside the bus. Dees recalls that the bus had “large plywood figures on the side”, which he says was why he painted on it, as he assumes it was deemed unsafe to drive.

Currently, the bus sits in a surplus off-campus warehouse on Industrial Park Drive and is turned on and driven once a month to keep it operational.

While the bus, aptly named Vroom 13, lies dormant, Grube said she wondered “what kids would paint now in comparison” to her research in Iowa 20 years ago. This led her to observe the paintings of preschoolers at Cove Creek Elementary School, a kindergarten through eighth grade school in Watauga County, twice a week.

Similar to her program in Iowa, her observations at Cove Creek serve as a research project to better understand children’s creative expression.

“I’m already using what I learned from going to teach there now,” Grube said. “I’ve noticed that every kid goes to the easel and brings a different sense of themselves to the easel.”

Will Hofmann, as corporate editor, is a journalist who contributed to this story.