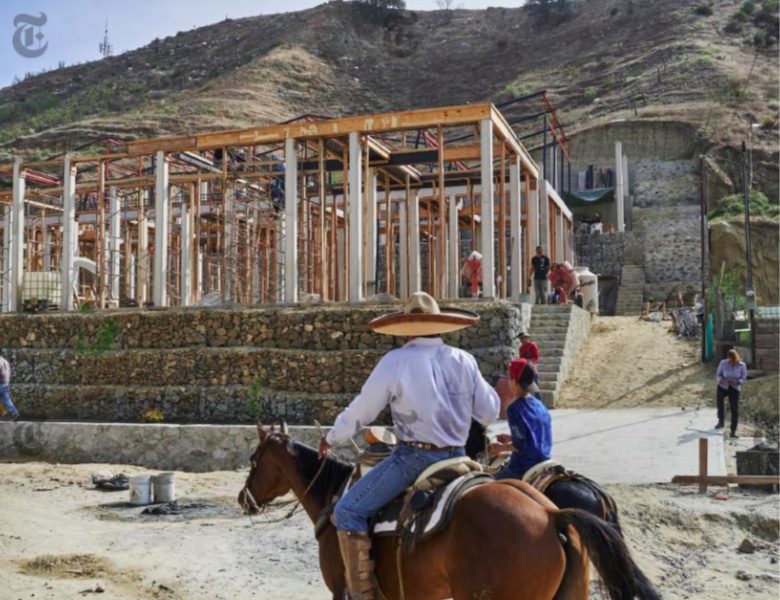 El Santuario Frontera is modeled after old pueblos, but built with a concrete and steel frame instead of adobe. [John Francis Peters for The New York Times]

The Cañón de Alacrán (Scorpion Canyon) is a steep valley that adjoins the American border wall, just west of Tijuana, Mexico. It winds through a barren landscape of arroyos littered with garbage, yucca and sagebrush, without paved roads or sewers. About 93,000 residents, many of them refugees from Central America, live there in illegal squatter camps inside lean-tos, tents and shacks crudely constructed from recovered waste.

Until recently, the impoverished population was content with these rudimentary shelters. But deep in this fractured landscape, a daring social housing experiment is underway. It’s called El Santuario Frontera, or the Border Sanctuary, a live working collective for homeless refugees.

Shrine designers Teddy Cruz, an architect of Guatemalan descent, and Fonna Forman, a political scientist from Wisconsin, have worked on both sides of the border for more than a decade, studying the transient population and ongoing informal urbanization. . Professors at the University of California at San Diego, where they lead an interdisciplinary design practice, Mr. Cruz and Ms. Forman see an urgent need for humanitarian shelter, as more immigrants flee north, many to escape climate change, drug cartels or political oppression. Some – stranded, deported, or caught in the United States immigration system – have camped at the border for years.

Mr Cruz and Ms Forman observed how the refugees recycled San Diego waste and built shelters in slow, incremental stages with debris from construction sites and landfills. “Out of necessity, everything becomes useful,” said Cruz.

Working with two pastors, Gustavo Banda Aceves and his wife, Zaida Guillén, who run a refugee camp in the Alacrán Canyon, they set out to develop not only emergency housing, but also a stable community that uses the available resources.

The design team created architectural designs and models and brought them back to the community for suggestions. They eventually came up with a multi-tiered master plan designed to house 350 homeless immigrants.

It’s a clean pueblo, like the old stacked dwellings of Taos, New Mexico. But instead of adobe, the housing is built with a concrete and steel frame that can be easily expanded and replicated to accommodate the growing population.

The foundation was financed by the sale of a Kangaroo armchair in oak and lacquered metal from 1951 by the French designer Jean Prouvé. Robert M. Rubin, a collector, sold the piece for $ 400,000 at a Sotheby’s auction two years ago and donated the proceeds. The eroded hill south of a stream running through the canyon was terraced and reinforced by retaining walls created from boulders held in place by wire mesh. This made it possible to build a base on which to build the two-story sanctuary and to help restore and stabilize the natural topography.

The second phase involved the construction of three pavilion-type structures with reinforced concrete grid-like frames. The upper level was assembled with a prefabricated steel frame donated by Mecalux, a Tijuana manufacturer of industrial storage racks. Inspired by Prouvé’s prefabricated metal case from the 1950s, Mr. Cruz realized that with a few adjustments, the ribs and structural struts could easily be reused for living purposes.

The Mecalux frame will be topped by low-pitched butterfly roofs in corrugated iron and plastic gutters that run through the valleys to collect rainwater and direct it to an underground storage tank, intended to be used for irrigation.

Once the roofing is complete, the selected immigrant families will move into their bays in the unfinished pavilions, tents and all, to build their own sections with plywood and recycled materials.

“It’s a matter of modularity, working in partnership and fairness,” said Cruz.

Lorena Branks, an architect based in Tijuana, will organize the infill work, while David Deutsch, a New York artist, has donated $ 650,000 through his PARC Foundation to create cooperative workshops on a pedestrian street that connects two pavilions.

A workshop will teach immigrants the skills to complete their own structures. The other will be an industrial laundry operated by residents to generate income.

“We are trying to re-imagine the migrant shelter as a more permanent infrastructure of inclusion and economic self-reliance,” Ms. Forman said. “We design for long term durability. “

[This article originally appeared in The New York Times.]

Warren Buffett continues to sell billions of stocks in this sparkling market, but here are 3 new places he’s been able to find value